Kaori Yuki uses Ludwig Revolution’s side columns to briefly comment on each fairy tale that she retells. In the case of Little Briar Rose, she points out that Idike is unusually popular among the readers, and wonders whether that is due to Idike’s personality or due to her role, or perhaps the way Lui acts around her. She also says that this particular tale may not be all that typical of Lui, but that she likes it nonetheless.

With Idike’s narrative singularity in mind, I find it interesting to examine why she of all characters is so dear to Lui, and what cements her position as the lady of his heart as his quest goes on. After all, it is heavily implied that his most sincere affections are reserved for her alone.

To avoid giving away plot points, not all potential brides will be commented on below. It suffices to say that if you read the series, it is self-explanatory why things cannot work out between Lui and the various characters, with the women’s romantic unavailability being the least of his worries.

Let’s broach the subject with the biggest running gag in the series: Lui is obsessed with big breasts. First inquiries and first impressions are all about the respective character’s cup size to him, much to Wilhelm’s dismay. Idike is the first flat-chested bride candidate in the series, partly because Lui first meets her in a dream, where she assumes the appearance of a fifteen-year-old girl due to her time having stopped. In Ludwig Revolution, flat-chested women are rare compared to the amount of well-endowed characters, the latter including numerous female characters not in the spotlight of the fairy tales.

Not counting recurring assassins and Kathrein from The Frog King, or Iron Henry, who is still a child, Rapunzel and Cinderella from their eponymous tales are the only ones without a cup size to Lui’s liking. I would also include Kaguya from Princess Kaguya in that line-up, as Lui starts pursuing her in earnest without even knowing her cup size, her chest hidden under many layers of traditional attire.

A captive locked away in the witch tower.

The youngest daughter of a fair ruler.

A hard-working girl covered in ashes. 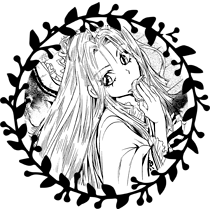 A rumoured beauty not of this world.

Kathrein aside, these three young women happen to be the few main characters of their respective tale that Lui cares about, and they are the only ones he treats with untypical gentleness. This gentleness differs from the consideration that he gives Maleen in Maid Maleen, and is a stark contrast to his indifference and superficial involvement with every other potential bride, who are all either shallow or have a nasty personality (to put it mildly).

All three of them not being Lui’s usual “type” as far as cup size is concerned was most likely not a conscious choice. I do, however, believe that those stories intentionally show Lui as not caring about looks for a reason. See, upon further examination, these three — and only these three — have something in common with Idike: They are all prisoners of their circumstances, they all struggle with the pain of loneliness, and they all pretend to be strong.

Lui has different relationships with these women: To Cinderella, he wishes to be an ally who makes her dreams come true; he feels protective of her as she pursues her prince. To Rapunzel and Kaguya, he offers marriage as a direct way to escape from their prisons (Rapunzel is locked up in her tower, while Kaguya is forced to marry and live in a land not her own). He wishes to help these women, even as Rapunzel and Cinderella’s hearts already belong to someone else. (Kathrein, too, feels lonely and neglected by her father.)

I doubt that Kaori Yuki synchronized Lui’s behaviour towards these women with the similarities of their narratives in mind, considering the series’ erratic storytelling and lack of cohesiveness. It is far more likely that she went with whatever idea she thought would make the most interesting story. And while Idike is not explicitly referred to outside of Rapunzel, I think the connection between Lui’s untypically gentle behaviour and those “trapped and waiting for a rescue” narratives is remarkable, and thus merits talking about.

(I admit that “trapped and waiting for a rescue” being presented as Lui’s type sounds negative when presented without context. Rest assured that all the female characters get their own happy ending due to their own actions and choices, even if Lui helps them along the way.)

The Pain of Loneliness

Lui seems particularly sensitive (and attracted) when it comes to women who try to be strong in the face of hardships — loneliness most of all. This may indeed be due to them reminding him of Idike, which he explicitly states multiple times in Rapunzel. Another — an additional? — explanation may be found in his own person. Lui is not intended as a character to sympathize with or to root for; he is arrogant, egocentric, flighty, irresponsible and frequently portrayed as shallow.

I mentioned before that Little Red Riding Hood in volume one comes closest to providing a backstory for Lui and Wilhelm. In that chapter, Wilhelm recalls that the prince was all by himself in a big room when they first met, surrounded by nothing but expensive, lifeless toys. At the beginning of Little Briar Rose, Wilhelm also theorizes that Lui may frequently sleep around due to having been raised in solitude, weighed down by his responsibilities as royalty and as the kingdom’s heir, and that he may secretly long for the touch of someone else’s skin. It is immediately written off as a joke, and I will not pretend that Lui is a character more complex than we see, but Wilhelm is also not necessarily wrong on all accounts.

Here is why: When Lui harshly criticizes Idike to the point of tears rather than offering her any words of comfort, his words are interlaced with a silent image of his silhouette amidst the toys — in direct reference to the previous chapter, where Wilhelm talked about their first encounter, as the toys match up.

“From the moment people are born into this world,
they are on their own.”

It is fleeting, it is provided without commentary, and Lui is not one to explain his own behaviour (even towards Wilhelm) — yet, it ultimately shows that his relationship with Idike is the only one to not be solely about the woman he is pursuing, but about himself as well. Lui understands Idike’s loneliness, pain and frustrations because he recognizes his younger self in her. His harsh words are either the result of his own harsh past and position, or sincerely meant as comfort, as he may have embraced them as solace while growing up without anyone to count on.

Lui connects with Idike through her weakness, her loneliness and her hurt, and that is something far more real than all the other relationships, which tend to be idealized, romanticized, or just plain shallow. Idike is also the one person who shows him her “ugliness” — her realness — from the very start as she speaks frankly, bluntly and honestly, and continues to do so even after learning of his status as a prince. Rather than seeing her positive traits first and rejecting her when confronted with the negative ones, as is the case with the vast majority of bride candidates, he is able to see her as the person she is from their very first encounter — not as the princess. (To be fair, “positive” in the case of the other characters usually means beauty and bust size.)

“You alone have found the real me.”

When Idike thanks him for finding the real her, that gratitude is not just about making it through the physical thorns and finding her outside of her dream world. It is about finding the truth buried under the lies that she believed, and about breaking down her walls — her nastiness and her strong front — to find out who she truly is, and to embrace all of it in the end.

And isn’t all that what Lui may have always wanted deep down — for people to see him, perhaps even love him for who he is rather than as the prince? For them to speak their mind and be honest with him instead of pretending to care? Hasn’t he, too, established a wall of thorns for his own protection after being disappointed time and again by those around him? Perhaps somewhere in all that, he may have admired how Idike was able to cry the tears that he could not shed for himself — one moment of vulnerability, more genuine than anything else.